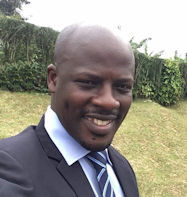 Kenneth grew up in Uganda and has fond memories of going to church early in the morning with his mother to work. He would clean the compound, dust chairs and get things ready for Sunday service.  Then he would attend Sunday school, sing, and read Bible stories. His early ambitions were to become a priest!

Kenneth later joined a seminary school, however, his father could not afford school fees and so he had to drop out. Yet, he continued to visit the seminary to participate in community work, helping the sick and needy – fetching water and fire wood and cleaning houses.

He later tried to attend a public, less expensive nursing program, but he did not get accepted.  However, he did not give up and he kept praying.  After some time, God brought a sponsor family into his life, thus opening up opportunities that otherwise would not have been possible. It was a miracle!

Because of sponsorship, Kenneth was able to attend Uganda Christian University (the best University in Uganda), where he received a diploma in Social Work and Social Administration and went on to obtain a B.A. in Community Development at Mountains of the Moon University. Kenneth also had the opportunity to travel to the US on an experiential visit to see his sponsor family and his life never remained the same.

After Kenneth graduated, he got a job locally doing ministry/community work that enriched him with great hands on experience. After several years of ministering and working for the people, Kenneth dug deeper into learning how to serve them better and through this process and with collaboration with Anne Dean, Harmony life Uganda was born!

Kenneth and his wife Sue both have a passion to serve vulnerable people in their community and they often work together in various capacities to be the hands and feet of Jesus.  They currently reside in the Fort Portal area with their young daughter and three sons as well as a few other children that they have taken in who need assistance.  They have big servant hearts for the Lord and we are grateful for all that they do for so many.